Relief for students as loan interest rates cut to 6.3% to protect graduates from soaring inflation

By Sarah Harris for the Daily Mail

Interest rates on student loans have been further reduced to 6.3% to protect graduates from rising inflation.

The Department of Education said the new cap, which will come into effect in the fall, will bring the interest rate below the RPI (retail price index) by the “largest amount ever”.

With the RPI soaring, student borrowers faced a 12% interest rate in September until a 7.3% cap was announced in June.

Universities Minister Andrea Jenkyns said the further reduction would mean “no new graduate will ever again have to repay more than they have borrowed in real terms”.

Interest rates on student loans have been further reduced to 6.3% to protect graduates from rising inflation

The numbers are still being finalized in August and the cap has been adjusted to the prevailing market rate (PMR) for comparable unsecured personal loans, which is now 6.3%.

This means that a borrower with a student loan balance of £45,000 will reduce their accrued interest by around £210 per month, against interest rates of 12%.

It is on the total value of the loan, as the monthly repayments do not change.

Ms Jenkyns said: “We understand that many people are concerned about the impact of rising prices and we want to reassure people that we are stepping up our support where we can.” 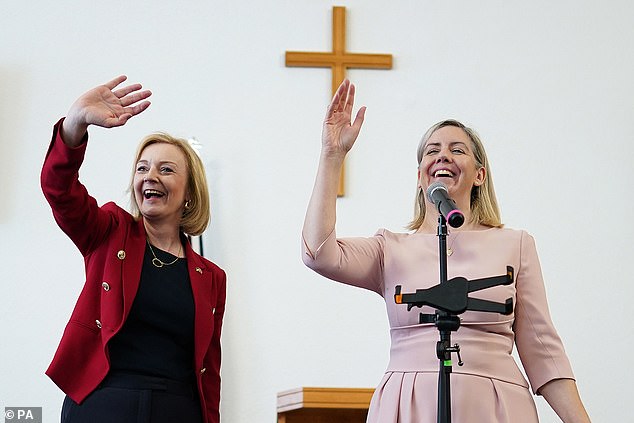 Universities Minister Andrea Jenkyns (pictured right with Liz Truss, left) said the further reduction would mean ‘no new graduate will ever again have to pay back more than they borrowed in real terms “.

She added: ‘For those starting graduate school in September 2023 and all students considering this next step at the moment, we have reduced future interest rates so that no new graduate will ever have to repay more than it borrowed in real terms. ‘

A spokesperson for the Student Loans Company said: ‘The change in interest rates is applied automatically so customers don’t need to take any action.

“We encourage customers to use SLC’s online repayment service to regularly check their loan balance and repayment information, as well as to ensure their contact details are up to date.”

The September cap applies to English, Welsh and EU students who started an undergraduate course in the UK from September 2012.

The new interest rate of 6.3% will apply between September and November.

Interest rates on student loans will be reviewed in December to ensure they remain in line with market rates. They will continue to be capped in line with the PMR forecast until next August.

Meanwhile, in February, the government announced that interest rates would be cut from 2023/24 so new graduates would not repay, in real terms, more than they borrow.